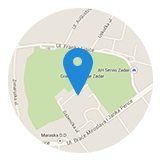 Ports open to public traffic are defined in the “Regulation on classification of ports open to public traffic and special purpose ports” and the port Gaženica, is in both; passenger, as well as in the segment of cargo ports, classified as "ports of special (international) economic interests of the Republic of Croatia. The legal relations between County Port Authority of Zadar, as concession grantor, and the Company, as concessionaire, are defined by the Concession agreement for port activities and the use of port infrastructure facilities ( infrastructure ) and port superstructure ( superstructure ) in the port area of Zadar - cargo port Gaženica. This agreement was signed 19 July 2002. With this agreement, the Company obtained the concession for the primary activities of loading, unloading and transhipment of goods and passengers, warehousing, transportation and other forms of manipulation and control of all types of cargo, mooring and unmooring of vessels, as well other port related activities. That is legal base for the use of the maritime area.

According to relevant legislation, the Company requested extension of the concession period during January 2014, and Port Authority of Zadar approved request and processed it to Ministry of Maritime Affairs, Transport and Infrastructure, and the 15/05/2014. Government of Republic Croatia brought a Decision on granting preliminary approval to extend the duration time of concessions granted to the company Luka Zadar inc.

Capacities used by the Company are partly in Company’s ownership and partly in third party ownership.